People have been following that religion for years, I am yet to be convinced.

yeah, my boy talks about the spaghetti monster all the time.  i guess its just as real as god.  who knows?


--------------------
"We live together, we act on, and react to, one another but always and in all circumstances we are by ourselves... By its very nature every embodied spirit is doomed to suffer and enjoy in solitude." Huxuly
the man in black fled across the desert and the gunslinger followed

just because we all see the

doesn't mean we all see the same

I pushed my fingers through the earth, returned this flower to the dirt. so it could live, I walked away now. But I know... Not a day goes by when I don't feel this burn. There's a point we pass from which we can't return. I've felt the cold rain of the coming storm
“None but ourselves can free our minds.”

And now, something completely different!

Not to burst your bubble OP but this is also extremely old.

oh damn, how old is it?! for some reason i just found out about this...

It's a few years, at least. No big deal. We loves us some FSM.

Now if you'll excuse me, I'm going to go on an overnight drunk, and in 10 days I'm going to set out to find the shark that ate my friend and destroy it. Anyone who wants to tag along is more than welcome.

damn i feel like a tard... i just found out about this like 3 days ago and thought i was helping spread the news lol! still fun to read though! cool avatar though

What wine would you recommend when eating of his holy garlicness?

Quote:
PookztA said:
oh damn, how old is it?! for some reason i just found out about this...


doesnt mean it still isn't funny. i continue to LOL at it

haha i am LOLing also

Yeah, this is new to me too... seems like common sense though, it's a shame the suggestions have yet to be implemented. 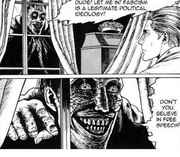 Lol i never saw the 'Ramen' substitution before

> What wine would you recommend when eating of his holy garlicness?

Promessa Rosso Salento 2001 for around $10 a bottle.  If you have money to burn, then Ridge Monte Bello Cabernet Sauvignon 2002 for around $115 a bottle.