Average fruit body heights reach six to eight inches with caps averaging one to three inches in diameter during later flushes. When growing in cooler temperatures, it usually always produces a very beautiful color caramel cap and stems. When growing in warmer temperatures, it's color changes to a more golden color at times. The stems are generally very thick, and it produces some large caps. Its a very heavy spore depositor. It also drops a very thick veil.

A very versatile cubensis, loved by many for how easy it is to grow. Adapting and growing in such a wide range of temperature conditions and substrates in nature. The B has been witnessed growing outdoors in nature fruiting several times in a wide range of temps and substrates. Several times one winter, night time low of 45F, day high of 60F, the B just flourished. Spring/summer, low of 75F, high of 90F, the B once again fruited beautifully. Not a super fast colonizer, its speed is average. The B strain is highly sought after due to the larger than average fruit sizes, some reportedly reaching up to 14 inches in length. When compared to other P. cubensis strains, the B is often considered a giant fruiter. Very large fruits can be expected on more nutrient rich substrates such cased grains, manure, compost and straw.

It was discovered by a grower that went by Mr. G. There was a lot of controversy surrounding this mushroom for so long because Mr. G started off by telling everyone it was an azure/cubensis hybrid. Although at times it does grow some broadly umbonate caps like p. azurescens, it is just a unique cubensis. 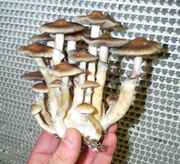