This method works very well for the isolation of mycelium from bacterial contaminants.

This method is briefly outlined in Growing Gourmet and Medicinal Mushrooms by Paul Stamets, but it is not illustrated in the book. This method works very well for the isolation from bacterial contaminants. Not only is the growth of bacteria inhibited by the Antibiotic agar, the mycelium is forced to penetrate through the media instead of across the surface, thus leaving the bacteria behind.

First you need the supplies: 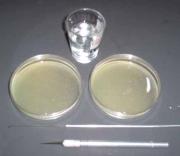 Place the rescued mycelium in the center of the plate you used for cooling the loop (into the melted divot) after dipping into the peroxide solution. It is very important to not get any agar in the previous step so the mycelium will lie flat, allowing it to be sealed under the sandwich. Be very careful not to smear the transfer around on the plate, or spread excess peroxide across the surface. You can omit the peroxide but I use it as an additional safety measure. Be sure that if you do use peroxide, you change it between each transfer to avoid cross-contamination.

Cut a 1 inch (3cm) square from the other antibiotic agar plate you have. It is best to pour the agar thin for this plate, so you can see through it, and it is easy for the mycelium to grow through. I recommend at least 1/16th inch minimum thickness (1.5-2mm) and a 1/8th inch maximum (3-4mm). It is also important to make this agar not only thin, but soft as well. You can accomplish this by reducing the agar concentration, but I find the typical recipes to be fine for this purpose (2% agar).

Place the square piece you removed earlier onto the rescued mycelium fragment. Making sure to cover it all, and making sure all edges of the agar sandwich are contacting the lower agar. Be very careful to not smear anything around, spreading possible contamination. Basically you want to seal the contaminated mycelium between the two pieces. Seal the petri and incubate as required for your species.

After a few days mycelium will penetrate through the upper piece. It may take as long as a week or more. Once it pokes through and appears healthy, it is a good sign you now have pure mycelium (contaminant free). Now it is important to keep a careful eye on the colonization to watch for weak growth, or stalling.

After a few more days, the mycelium will grow along the surface and crawl down the edge to the base agar. It is important to watch for even growth down onto the bottom layer. If it gets to that point and stops (or stalls), it may indicate that bacteria has crawled out from between the sandwich. Once it completely colonizes the dish, take a transfer 2-3cm away from the edge of the petri to ensure the cleanest tissue...

There you have it; it works very well to keep bacteria from crawling along with your mycelium, and reduces the chances of airborne cross-contamination when the bacteria are sealed under the agar. When working with a contaminated petri, this method will guarantee you will only need one transfer to antibiotic agar. Mycelium from this plate can inoculate standard media recipes without antibiotics or peroxide.