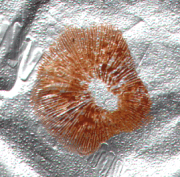 This mushroom can be deadly! It grows on dung and there is no description of it available at this time. It has a distinctively brown spore print. Always take a spore print.

STALK 6-20 cm long, 1-3 cm thick, tapered upward or equal with an enlarged base, white, often finely powdered or scaly at apex or occasionally throughout; hollow or solid.

UNIVERSAL VEIL Membranous, white, forming a saclike volva that sheathes the base of the stalk; volva often large and ample but sometimes thin.

HABITAT Solitary to widely scattered or in small groups on ground under oaks, hardwoods and conifers.

EDIBILITY DEADLY POISONOUS!!!! One mushroom can kill you!

VEIL Yellow, forming a small, superior, collar-like ring on stalk, which may disappear.

HABITAT Solitary, tuffed, or in groups in flower pots, greenhouses, and planter boxes, or if it is warm enough, outdoors (in lawns, gardens, etc); widely distributed, fruiting indoors most anytime, outdoors mainly in the summer.

EDIBILITY Poisonous to some people, according to some sources.

VEIL Thin, pale yellow, evanescent, or leaving slight vestiges on cap margin or an obscure fibrillose zone on stalk which is subsequently blackened by falling spores.

HABITAT Gregarious, usually in tufts or dense clusters on decaying wood of both hardwoods and conifers, but sometimes growing from buried wood or roots in thus appearing terrestrial; widely distributed. It is abundant in California in the fall and winter, less so in the spring, and is one of the first woodland mushrooms you are liable to encounter.

EDIBILITY Poisonous! In Europe and Asia, it has caused several deaths; in America, only gastrointestinal upsets have been reported. Fortunately, the bitter taste is a deterrent. 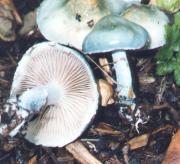 STALK 3-8 cm long, 3-8 (12) mm thick, more or less equal, smooth and pallid above the ring, colored like the cap (concolorous) or paler below, and usually with small cottony scales; often slightly viscid when moist.

HABITAT Solitary or in small groups in rich soil, humus, woody debris, or sometimes even in grass; widely distributed. Sometimes found under oak, aspen, and conifers.

EDIBILITY Poisonous, not recommend. It is deemed poisonous by many authors but is supposedly eaten in Europe.

HABITAT Solitary, scattered, or in groups or troops in woods, widely distributed and common. Sometimes fruits late in the season in chaparral and mixed woods (oak, madrone, manzanita, and pine), often intermingled with R. cremoricolor and Lactarius vinaceorufescens. It also grows on very rotten wood—unorthodox behavior for a Russula.

EDIBILITY Pleasing to the eyes of all, to the tongues of some, but to the stomachs of none. As its name implies, it is poisonous, at least raw, and can be used to induce vomiting. This mushroom will make you think you are going to die and is a great trip if you don’t want to get high and enjoy projectile vomiting.