The Metabolic Pathway of Psilocybin Production

A document describing the chemistry behind the psilocybin production in mushrooms.

Metabolic pathways are important to understand when you are trying to produce a certain chemical from a living organism.  Psilocybin is produced starting from chorismate, which is produced on the Shikimic Acid pathway.  The Shikimate pathway is present in many different plants, fungi and bacteria, but is not present in animals, and is important for producing many different aromatic compounds, including many antibiotics and the tryptamine-based psychedelic drugs, like DMT, the ergot alkaloids and psilocybin.  It is extremely important to know the metabolic pathway in order to do any scientific investigation of its production.  The idea of this paper is simply to list all of the products and enzymes so one can look them up, if the need arises.

The first main step is the Shikimate pathway which is carried out in the cytosol of the fungal cells.   This produces a product called chorismate which is used for the synthesis of folate, ubiquinone, phenylalanine, tyrosine and tryptophan.  This pathway starts off with phosphoenolpyruvate, a product of glycolysis, and erythrose 4-phosphate, a product of the pentose phosphate pathway (a byproduct produced via a transketolase enzyme) that acts as a phosphate donor.  These pathways are illustrated below.  The pathway looks like this, starting with the starting products and then continuing with the enyme on the right, which produces the next product:

Chorismate can now go to any of 5 different pathways; we’re concerned with the tryptophan pathway:

The pathway for the conversion of tryptamine to psilocybin and psilocin is still unclear, but it is proposed that there are many different steps, since the phosphorylated intermediates baeocystin and norbaeocystin are produced, in addition to psilocybin, which is most likely produced via one phosphorylase enzyme from psilocin. The experiments by Gartz et al. regarding an addition of tryptamine hcl to the substrate showed an increase in psilocin levels compared to psilocybin which suggests the downregulation of a phosphorylase enzyme at this step, and also provides some possible insight to the evolution of psilocybin in mushrooms.

Both of the starting materials of the Shikimic Acid Pathway, phosphoenolpyruvate and erythrose 4-phosphate, are ultimately a product of glucose.  Glucose is phosphorylated by ATP, which loses a phosphoryl group to glucose to become ADP: 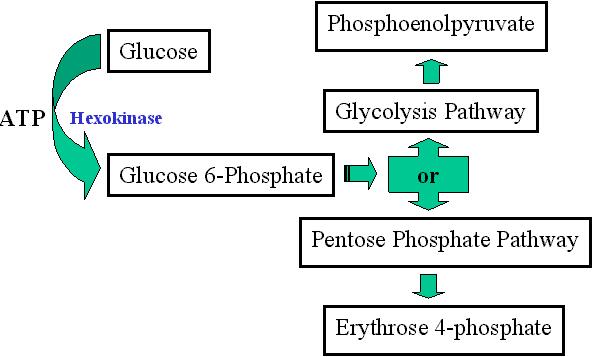 The Glucose 6-P is then used on two different pathways, glycolysis and the Pentose Phosphate Pathway to produce our two starting materials.

Phosphoenolpyruvate is produced as a byproduct of glycolysis: 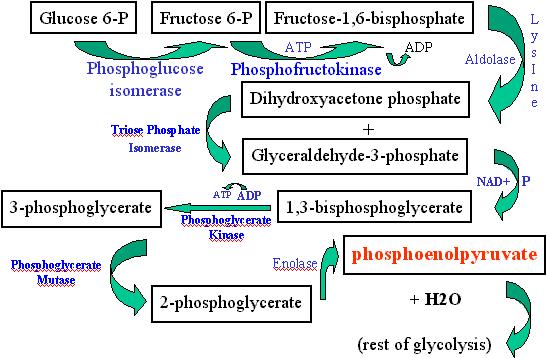 ....and Erythrose-4-P is produced as a biproduct of the Pentose Phosphate Pathway: 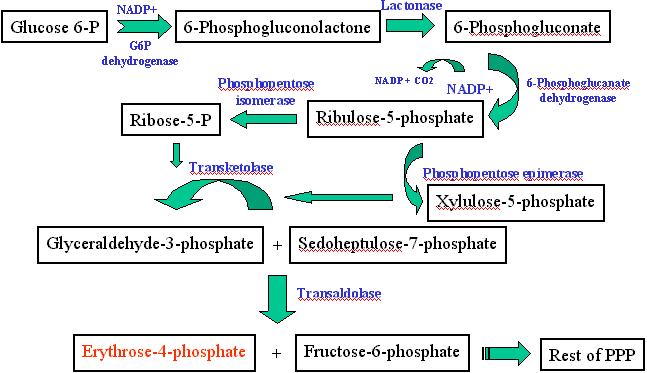 Unfolding Nature: Being in the Implicate Order
Copyright 1997-2022 Mind Media. Some rights reserved.