These mushrooms popped up right in a spot where park people heavily pruned a mulberry tree. I was sad about the lack of access to mulberries but delighted at the benefit of having a beautoful purple mushroom in a huge clump with the ability to help me connect with the divine whole/Gaia. 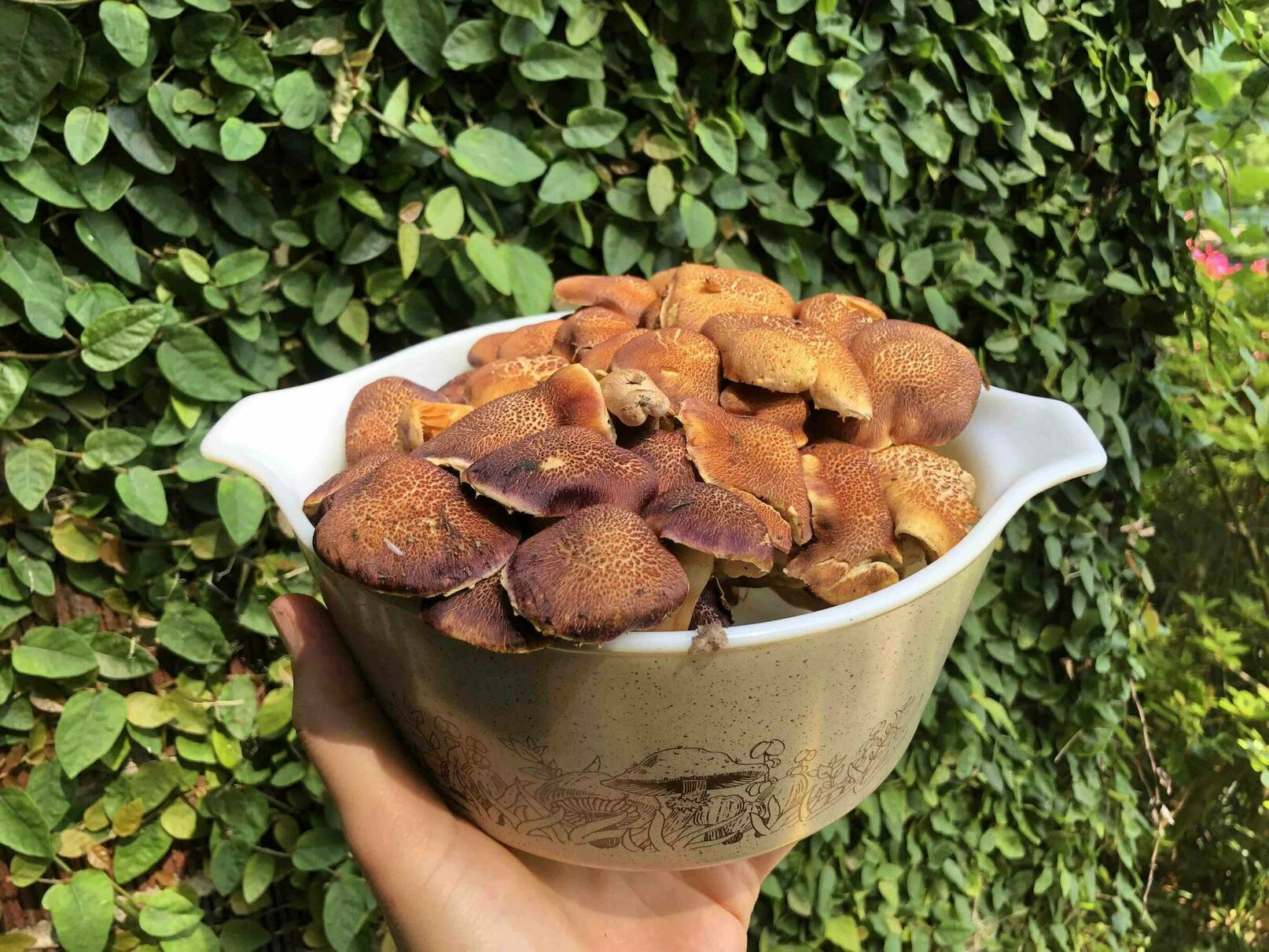 At first I prepared a tea but then my gf mentioned that it was too much like broth for her and that seaweed would be good to add. I agreed and we made Gymnopilus sacrament soup.

They popped when these plants were flowering, good to know!

I foraged these in Atlanta, GA.

We split the tea in half but I ate ~150g of the cooked mushroom and my gf ate 50g. I didn't weigh the mushrooms after they were cooked, but I definitely had more. I believe much of the mushrooms were already in the tea, which had been slow-cooked for an hour, but it's hard to know how much it impacted the experience.

I thought the mushrooms would be bitter but to my surprise they no longer had a bitter taste and could be eaten with ease. It's amazing to know that this mushroom can be made edible by cooking then eating. And it was pretty tasty!

We vaped some organic cannabis as it’s my experience that I really enjoy cannabis before mushrooms to potentiate the experience and have the synergy between the two.

We ate the soup at 7 pm, it was absolutely delicious and had no bitter taste of the mushrooms either. I nibbled fresh mushroom and it wasn’t as bitter as some older specimen.

4 hours 17 minutes after finishing the soup, recounting my experience since I didn’t have my phone.

I walked into the park and immediately felt different within 15 minutes of finishing the tea and mushrooms. It took me about 30 min to drink and eat everything.

At first, I felt giddy and laughing. Of course, I’m probably partially primed by the name laughing gym but this is my fourth experience with them and this was the first time I really felt that level of giddiness and altered states.

The visuals look different rather than the breathing and flowing of the ovoids, it was as if there were different layers and the texture of the tree and the contrast between the tree and the background changed. I saw a few faces in the hickory tree bark. Then patterns began to emerge in the grass as I touched a 200 -year-old oak tree in my neighborhood. I was feeling a lot and we walk by a dog barking at us. As I attempt to play it cool we’re walking toward the road and I notice glass on the ground. I’m barefoot and as soon as I saw the glass I had a shard in my foot. I immediately went to find a place to sit down and asked my girl friend for a poultice plant and she found some violets.

After chewing and applying violets to my cut I saw the blood, realized it was cleaning itself and sat and watched the rocks melt together into oneness. I decided I couldn’t walk and asked my gf to get the car. While waiting for her I meditated with my eyes closed and had some stunning geometric visuals. It was as if I was looking at different dimensions and axis shifting, enveloping and opening, and moving in 3D. I’d say it was similar to a 2g ovoid experience. Actually, 1g of dried ovoids was a bit more intense on my body, whereas the gyms felt less intense but more visual.

I was concerned about my foot and I heard a strong message from Gaia “You will be fine. You’ve worked hard to eat healthily and you exude spices and compounds that prevent infections from spreading. You are strong and healthy and your body will overcome this minor hurdle.”

It was a sense of peace and beauty. I was quite enjoying the meditation, the infinite plane of existence opening and closing while my eyes were closed and when my gf arrived I went with her and went home to wash my foot. Applied some plantain leaf this time and sat on my porch where the trees morphed into fractals and the cumulonimbus clouds formed above. The rain barely missed us providing a line between east and west. I even moved all my cacti in and not a drop came down sadly.

At around 1 hour and 30 minutes in, I had a phone call with a friend who recently found a big patch of the same mushrooms. I told him about how strongly I was tripping and wanted him to know what he could expect should he wish to connect with the divine.

At around 2 hours I tried playing guitar with my girlfriend and we played two chants that were amazing. I played guitar and drank some water which made me feel a little nauseous. It passed fairly quickly by reclining in my seat. We ended up looking up lyrics and getting pretty sidetracked on the phone. I spilled some water with my guitar and decided to clean more in the house and clear the dishes. I love how mushrooms always encourage me to clean everything. Pretty sure I dropped my guitar twice trying to get it unraveled, I was much less coordinated until 3 hours later.

By 2-3 hours in, I was feeling closer to normal and by hour 4 I was ready to write my experience down.

6 hours into the trip we saw the blood moon and the halo of the moon was more intense with the open pupils. I noticed that I was much more talkative than normal as well and extremely excited to share what I knew about the gyms.

Overall this experience was absolutely amazing. I saw rainbow visuals, fractals, morphing clouds, rays of sun through clouds that looked heavenly, and more. I had a joyous time playing and singing and feeling one with Gaia/the Whole.  Gyms do have magic after all.