The second trip in as many months...except total contrast!

The Yang to the Yin trip we just had a month earlier.

I am posting this months after the fact but better late than ever!
The second encounter with the mushroom in as many months.

Some of my Twitter, Facebook and Tumblr friends, may recollect my last encounter with the mushroom. It piqued a sort of keen curiosity I do not recollect having since I was into video games and there was a new RPG coming out! So, my same partner in crime and I decided to procure some more medicinal sacrament and once again venture out into the wild, so to speak!

As is the usual case with psilocybin/mushrooms/teonanacatl, it somehow has a way of working things out (and in the process makes you aware that “coincidences” simply do not exist). Consider this, a few days after our last experience a friend of my hits me up and says “You won’t believe this but a friend of a friend has half an ounce of mushrooms, would you fancy some?” (he didn’t say fancy, we’re Yanks). Do you know the last time someone asked ME if I’d like to buy some? NEVER!!! but you bet your ass I would like some!

Procuring it was a bit of a pain in the ass but as, stated, the mushroom spirit has a way of parting seas and making a possibility become a reality. The North Eastern region of the US was ravaged by Hurricane Sandy during the weeks following our original trip north to …trip. As such, we expected the scenery that was beautiful in the deciduous stage of the forest to be gone but we didn’t expect what was to come.

We chose an early Saturday morning departure date much like last time. We knew that the weather was getting colder, the ground and the air chillier and damper but we were prepared…or as much as we could have been. This will be a focal point of some of the take away, later.

This is me putting on layers upon layers because it was in the 20s here in NYC and colder and windier up in the mountains.

On our ride there we hit no traffic, had great conversations and a pleasant experience in a Starbucks outside of a major city (which WAS STILL patroned and filled with hipsters haha). There was a bit of flurries as we were getting closer to our destinations but nothing to deter us.

We parked in the parking lot we passed by last time on our hike up, geared up and made jokes that it seems like we’re putting on tactical SWAT gear as we had a ton of clothes, gloves, pocket warmers and scarves as well as thermos of hot, delicious tea, snacks, sketch pads, paper, pens, music players, and much more (ear plugs, lip balm, hand sanitizers  some basic first aid stuff). Although, I should have ditched my hiking boots for some real winter boots. As we made our way slowly but surely up the mountain to our previous sanctuary of intergalactic unison, we (or at least I) made my intentions known to the mushroom spirit and we began to ingest the fungus with some freshly squeezed OJ. We were soon at our point of destination.

The setting shifted from a fall painting 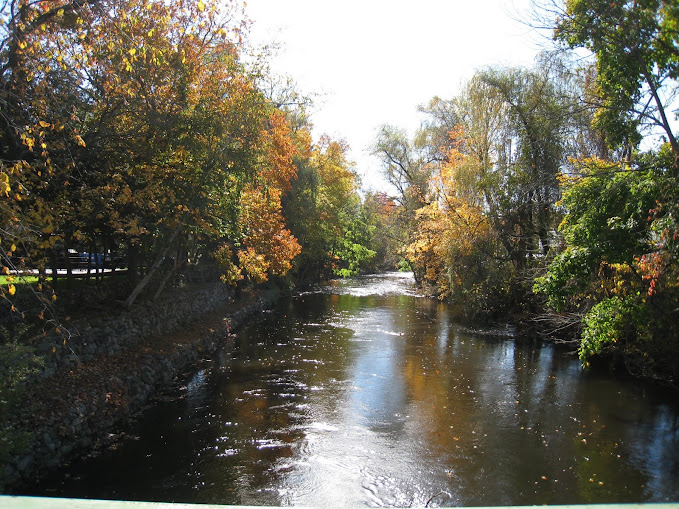 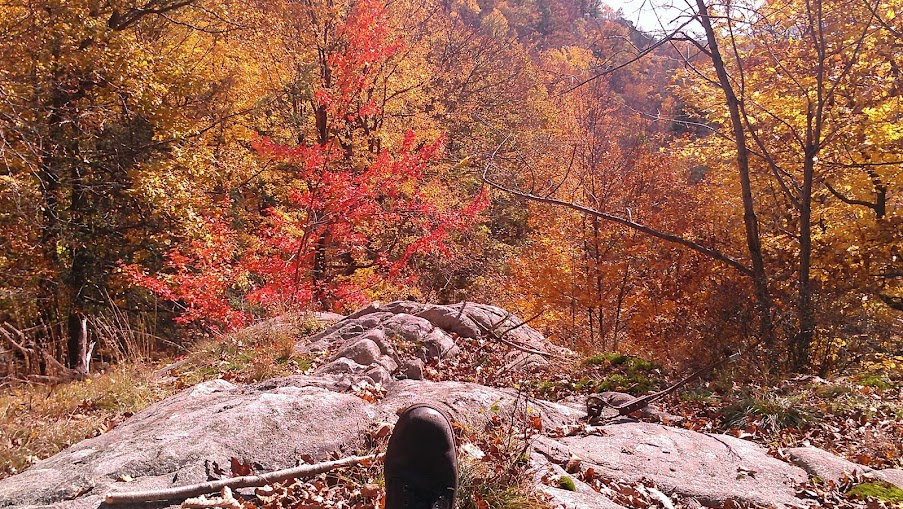 to a lot more of a gloomy facade.

We tried to get as comfortable as possible as we both felt the come-up. At this point I realized I have a little bit more to eat and proceed to ingest the rest…I was feeling very cold when taking my hands out of my gloves to do so and to my left my partner in crime was definitely a bit further ahead than I and was definitely enjoying himself.

We experienced the usual; loving the sky, the earth, the rock, whatever leaves Hurricane Sandy left behind and, in my case, the moss.

Then….things went south…We were both very cold to simply sit around and neither of our phones nor MP3 players functioned with gloves on. We threw a pair of pocket warmers into our gloves and were playing with them because we were all ready tripping somewhat hard. I decided to propose that we walk around and unlike last time, being more extroverted to each other than to be inside of our minds. We proceeded to quickly pack up whatever we had and head out.

We slowly and carefully made our way down to the hiking trail which we figured would be a lot less busy than the usual days when the weather is nice as winter was approaching….and then we were REALLY tripping balls…Mother nature pretty much hated that we would be as prepared as we were to “cheat” since the weather was NOT hospitable and decided to throw a few curveballs at us.

And, it wasn’t over going to get much better…First, we were both tripping hard and it was difficult to walk and talk as usual. My partner kept having gas as it happens on mushrooms but he was convinced he needed to poop instead, this was an ongoing battle for the next few hours but provided some much-needed humour. This apparently was his own massive chaos…Walk, stop, pondering pooping outdoors, letting some gas go, walking, stop, pondering pooping outdoors. and so on…

Next were my partner’s favorite encounter…HIKERS…At one point we took a break sitting on a rock and there was a dog behind us with a hiker. The dog was a bit ahead of a hiker and thus closer to us, I asked if the dog is friendly and the hiker smiled and said “of course, she’s a sweetheart”, a gorgeous German shepherd. As they walked by, my buddy said “why do you talk to them?” I said “otherwise, it’s weird, I was clearly looking at him anyways” he says “I hate them because I don’t know where they come from and how much they’ve heard…and where do they go?!”. And, at this point two more hikers come from around the bend and we don’t see them as they get close. It’s a couple, a guy and a girl, and the dude is grilling/staring at us…hard lol So, after this, I began to share his sentiment towards the unwelcome intruders. They did appear to come out of nowhere (as is the usual case with hiking trails) and they seemed to disappear as though they did not exist at all, LOL. As my partner put it “They never came back around the trail…they had one role in life: quick mindfuck and get out!”.

His statement of “where they come from, where do they go?!?” completely mind-f*cked me….I started to peel away at the layers of that question. “Do you mean where they walked from, from which direction on the trail OR how did they come to be out here and all of their lives’ events that lead them here?” It was a downward spiral for me. I began to look at everything with a million gazillion layers. He then asked me “where are we going/heading?” My reply; “in life? on this trail? in general direction? towards a rock? etc” I couldn’t STFU to save my life and everything was overwhelming. It reminded me of this one story in a pizzeria when one of my friends asked the worker there where he was from to which the guy replied “From my mother’s c$&t.” (LOL).

Then, again, my buddy had to poop. I finally just let out a “DUDE, YOU’RE A PRIMAL ANIMAL…JUST DO IT!!!!”…We then laugh, uncontrollably on the ground for a few minutes, then we both attempt to stop because he has something to say “Dude, you don’t understand, I KNOW what is going to happen; pants will come off, I will squat down and SHIT ALL OVER MYSELF, trust me, this would REALLY happen”….much more laughter ensues. But the environment didn’t change.

It was dark and gloomy and I felt that when I looked up at the sky, the Universe was giving me a billion middle fingers like “oh you think you’re going to come out here all ‘prepared’ and think you’re going to be ready for what the planet can do? well, no, you little pissant!!!!”. From this, “the planet does its thing not for you, but because it’s one giant, living organism and it would be cold and wet and snowing because it’s convenient for the planet and f*ck what you had in mind…coming here to ‘be one with the universe’….screw you!!!!”

Needless to say I wanted to be back home or something. Although, there’s no one I’d rather be in this situation with than my buddy. He’s as experienced as I am and we both help ground each other in reality, as well as help each other up from the few slip and light falls we had…Also, we shared a few giggles as I attempted to eat the small remnants of the mushroom that was left in my bag. My buddy opened the bag and turned it inside out and I was trying to eat and lick it off of his hand but ended up getting most of it all over my face…

Pretty much, the whole experience has been the COMPLETE OPPOSITE of the first trip. The beauty was replaced with doom and gloom, the unity of my atman and brahman that I felt was replaced with disconnection from the Eternal One, the Creator, The Universe, what have you and the sense of happiness and positivity was replaced with struggle and hectic surroundings where I attempted just to make it through.

Not quite “EGO DEATH” level 5 but definitely very close.

After a bunch of tumbles and fumbles and a hysterical attempt of my buddy to go take a poo in the bushes (that he was convinced would end up all over himself) we decided to head back to the car (which earlier we considered non-existent to stick with the trip) and GTFO.

Again, I had a craving for meat much like the last time and we decided to find a decent place to eat (settled on Panera Bread that was terrible…this franchise not them all in general).

I felt like my mind, at this point, was raped with a dozen plungers and a precinct of angry NYPD cops and didn’t know what to take away from all this. It just left me with “a billion upon trillion questions and confusion” but if there’s a Yin, there has to be a Yang, right? And, this was definitely the harsher Yang to the softer Yin, we experienced prior.