homemade lids that have stood the test of time

I've been meaning to post this over here for awhile now... I have a couple teks here that require these lids so it's only proper that I post how they are made.

Quote:
Here is a quick look at how I prepare my grain spawn lids

These are made with the same layering as the master jar lids described below vvv... three layers of tyvek.. two postal
(one on bottom and one on top), and one kite tyvek layer in the middle. I do the same thing for these up to putting the tape on the top... you can see that I just put tape on each side and leave a strip down the middle. Then I smear that strip with silicone to embed it in the tyvek, BUT I leave a small spot that I don't put any silicone on at all.. it's about the size of the tip of my finger that is covering the tyvek in this pic.. 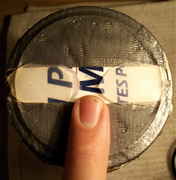 I leave that little area free of silicone.. thats the FAE.. Then I just put an 1/8 inch layer of silicone on each side and smooth out with a wet finger... I probably over do it with the ports, but I love my space.. I can get about 10 uses out of each lid. The other thing with these is that I don't put the 2nd port underneath on the inside of the lid like I do with those master jars. One probably could but I don't think it's necessary for these grain jars. for the master culture, yes.

The other reason I like tyvek lids is that not only do they create a seal on that upper 1/8 inch rim of the jar, but since there is tyvek between the jar threads and band threads, there is a seal created there also.

This is a tek on making a lid that i've used for over a year now. it incorporates two kinds of tyvek... the kite makers tyvek  (single piece in center) and tyvek  envelopes (two outer pieces... top and bottom). it has TWO self-healing inoc. ports; one on the top layer and one on the bottom layer that goes inside the jar. the ports are positioned right on top of each other. So, for anything to get inside you jar, it would have to get thru three layers of tyvek  and two inoc ports. It's damn safe. The best part is that the filter is controllable from 40% covered to 100% covered. just by putting tape over how much you want to allow. heres how to do it:

Get these materials:
-duct tape
-4oz jelly jar with just the band (no lid part needed)
-tyvek  envelopes (this is paper like tyvek , where the kite makers is more clothlike... the kite makers is more quality but lacks in durability. it tends to twist when pressure is applied to the lid when you screw it on and off; but if you have two layers of post tyvek , it's rigid enough that it screws on and off like a regular plastic lid. )
-kite makers tyvek  (if you don't have this, it's ok... just use the two envelopes or put a third piece of the envelope kind in place of the kite makers)
-scissors
-Aquarium silicone

2. prepare your lid band by flipping the band over and taking a pliers and flattening that ridge on the inside of the band... this ridge, if not flattened, will cut into your tyvek  if you screw the band on too tight...

take your three pieces of tyvek  (postal on top, kite in middle, postal on bottom) and stretch it over the opening to the jelly jar... try to get it as flat with no wrinkles as possible. 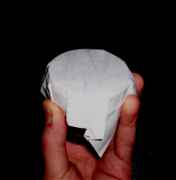 3. Screw the lid band over the stretched tyvek... should be tight like a drum now...

4. Now cut all the extra tyvek  all around the jar except for an 1/8 inch flap all around... 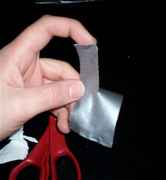 6. put the one half of tape on the top down the center of the lid...

I start in the middle and firmly push the tape into the tyvek  moving towards the inner edge of the lid band... this makes it so there isn 't a gap in the tape where the inner edge and tyvek  meet. do that on both sides...

7. Now we're going to use that other half of the tape to tape that flap back up onto the lid band. do this by tearing the tape into smaller pieces like so... 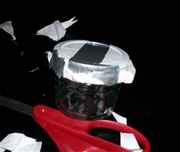 heres the lid so far.. 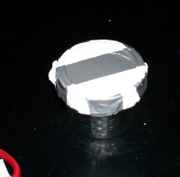 8. now take your lid and aquarium silicone and we're going to make the inoc. ports. might want to get some paper towel.  this is what
the silicone looks like... 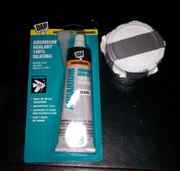 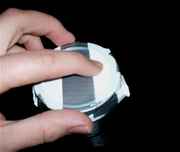 10. Now you can put enough silicone on the tyvek  that you already smeared on to make at least an 1/8 inch thick inoc. port.. use something wet (i just use a really wet finger) and spread the silicone out so that it's even... 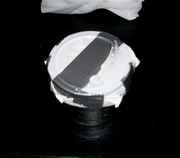 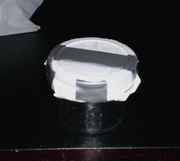 11. Now, carefully (watch out for the wet silicone on top) flip over the lid and smear silicone just like you did on top in the same spot under the inoc port on top on the bottom layer of tyvek . (so the needle goes thru both where ever to you poke it thru the top port) Do the same as you did on the top and put a 1/8 inch thick port on the bottom layer. BUT make sure you leave an 1/8 inch gap between the edge of the inside lid and the silicone. thats where the jar rim goes... keep this part free of silicone as much as possible.... the pic is kinda hard to see but it's there (silicone is clear. lol) 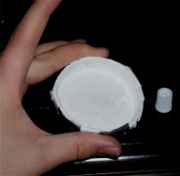 Now let this dry for 1.5 days and it is done.  you can reuse these many many times... they are meant to be used with master clone  tissue grown on grain to preserve and extend an isolate like in this link... (there is actually a brief description of these lids in this tek link)

This is how I use them to extend myc. isolates.

Once I have a colonized 'faht jar' that i got from using the clone  tek in that above link, I can do one of two things... use this myc right away to inoc jars or I can dry the grain (corn) out for later use. It's really easy to dry the jars out... just remove the tape from over the tyvek  side on the lid... they'll dry out in two days. heres what the taped and untaped filter sides look like... (notice how there is just a sliver of tyvek  showing on that taped one... thats so the jar isn't completely sealed up, which invites bacteria, but not enough of the tyvek  is uncovered to let the small amount of grain dry out before it's colonized.)

so after I have a colonized faht jar, (dry or not) I'm going to PC  a syringe full of water with the tip submerged in water in a qt jar and PC a jelly jar with lid and 40 ml of just water for 40 mins at 15 psi. (make sure you don't PC  your master jar. lol)

**NOTE** this is very similar to what Agar wrote up in this thread except hes doing it on a larger scale, but it's the same process... the upside to using these lids is that you can control the filter size with tape to allow these jars to be dried out and stored at room temps.

Take the colonized master jar and tap it against your hand to break the kernels up... it shouldn't take much.
Now take the now sterile cool syringe and flame the tip... wipe the inoc port on the master jar with an alcohol soaked paper towel and
inject the syringe full of water into the master jar....

remove the syringe and gently shake and swoosh the kernels around in the water to knock the myc off into the water. heres the water in the jar...

water after swooshing for a couple minutes (try not to shake water onto the tyvek  on the inside of the lid... no need to shake it that hard really... it'll take a second if your kernels are dry before the myc attached to them starts breaking off into the water, needs to soak for a minute)....

now flame your needle and wipe the inoc port again and retrieve the myc water... you will only get about 5 - 6 ml of water back from your 10 as some water gets stuck to the kernels and just doesn't come out. but thats normal. heres the myc slurry... it's suuuuuper thick but extremely finely shreaded.

now take that 6 ml of myc and transfer it to that other jelly jar with the 40ml of water in it and you have a jar of 45ml myc water that you can draw from to do your jar inocs.

and even better yet... you can retape the filter on the faht jars that you used when the grain was hydrated and the myc will start growing back to be used again. AND if you use a dry faht jar, you can also REHYDRATE and use again... just add 10ml of sterile water via syringe to your dry faht jar and the corn will reabsorb the water. the myc. will come back out of 'hibernation" and start colonizing the rehydrated grain... this is a jar of PESA's that i just used again after like 6 or 7 months maybe... it was dry but then i harvested the myc and rehydrated the corn and it plumped back up and its white as ever!!

basically I can take any one of these isolates...

and, in one PC'ing and round of inocs, make enough pure cultures that can be hydrated and dried out at will and can be stored at room
temp in a drawer somewhere to last me well over a year.

I haven't had a single problem with these lids since i started making them.
And, this is just one design... you can accomplish just about any criteria with tyvek , tape, a lid band and silicon... it's fun to play around with. The main thing with these lids is the three layers of tyvek , the two inoc ports on top and bottom, and the filter control. hope this helps others like it does me.