welcome to the original monotub thread

first of,
thats how the whole thing looks like:

detailed instructions
(there really isnt more to it ..)


1 get a nice tub, preferrably see-through. mine is from ikea.

2 drill holes in the box, 4 at top of CASING LAYER LEVEL

2.5 add two or more holes at top of the tub so circulation
between the bottom and top holes moves the air around

and this is how it is looking 11 days later,
never opened or misted or did anything to it:

and that's how dat sexy hookah looked at harvest day:

another tub done in similar fashion about a year later:

now how it came to it:
so maybe someone remembers me asking people over and over and over again
to finally try the double tub concept adapted to one tub .. but noone did it.

so, if you wanna know something you do it yourself, right?

base was some colonised rye / millet prepared by my spawnbag tek
(check link in signature for details) and spawned with agar.

after bag was 100% i sterilized 3 quart jars with vermiculite i saturated
using a mix of 500ml alc free beer boiled down to 200ml and used water
to thin it out, in order to feed nutes into the vermiculite.

that was mixed in the tub and let recover for a day.

next day, a mix of 60% verm 40% peat and some calciumcarbonate was nuked
in the microwave for 10 mins, stirred and nuked again for 20 mins in
a spawnbag -> after cooling was applied as a casing layer.

couple days later first myc breakthrough, patched by kicking around substrate,
today again and properly msited with h2o2water and voila,
made 6 holes, stuffed with polyfill, taped the lid on and now were waiting.
peace ohm

update
casing layer is evenly penetrated and it looks as it wouldnt dry out too much.
wonder how it will go on

update 2
well some strange mutant blobshroor is evolving, besides that, nothing.
casinglayer is evenly penetrated everywhere, im waiting for hyphal knots.

i should have hung a hygrometer in there, just for kicks.
peace ohm

aaah feels so good that this baby didnt go to shit,
i was alreadys tarting to feel sad of cutting holes in a nice binbut
it seems that after all, it would work out !

update 4
threw in a pic of the picset i took through the lid,
not the best but it gives you an idea whats going on.

most of the pins look kinda, well, long n thin, i guess co2 levels
are rocketing within that tub but who knows.

still the tub hastn been opened once

final update
so guys .. guess what, time went by and eventually this pretty weird project
approached an end

well, what shall i tell you, every single one of my expectation payed off
perfectly and left me with complete satisfaction.

the monotub turned out to be as good, if not even superior to its big "brother",
the double tub which inspired me to start the whole thing in the first place.

it managed its air exchange, kept humidity up and hell dig that,
i even took the tub with me on the train b/c i wanted to see how it fruits
and since i had to go home over holiday i wrapped the whole thing in
newspaper and went on a psychedelic train ride for couple hours,
lol dudes ill never do that again, ever !

anyway, so, enuf of the blabla, on with the goodie goodie !

first off, i'd like to throw in an angled view of her goddess,
showing her lovely babies:

lets take a little closeup, angled again, shall we,
darn aint they sexy:

all of the fruits inside came in HUGE clusters starting up
from 2 to 3 shrooms till whopping 10 or more,
all perfectly formed with very few aborts sprikled.

take a look at these nice hats from above: 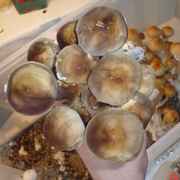 here's one of the most beautiful clusters the tub had,
i saw it and had to take numerous pictures of it before
picking it, so here you go, isnt it stunning: 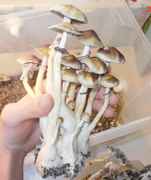 and finally, since you people are all about it,
here we go with a shot of the whole lot before i threw
it onto the compost pile: 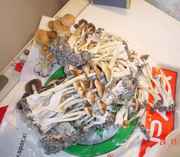 couple pics of a tub a did exactly like the one above, about a year later:

resummee:
judging by how much work the tub involved (basically no work at all) and comparing
it to how it performed, i must say that i am GREATLY surprised by how well it
did and must add that it met my very own, actually quite high, standards.

the great thing about the monotub is, that once sealed, you will not have
any contam from the outside ever penetrating the "polyfillshield" and
therefor fruits from the tub should be the perfect candidates for cloning
and alike, imho.

so, i hope this is another lil goodie i could throw in for the omc,
i hope you enjoyed the show.

agar had some useful input for people who cannot get translucent tubs: 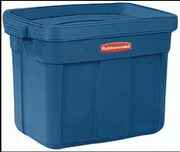 Well, we all are guilty of PEEKING, every so often..

This is where contaminates can enter, gain a foothold & F/U the grow.

It is a WISE idea to invert a large see-through trash can liner.
OVER the top of the tub, held down with masking tape.
Then, apply the lid.

That way, if/when you peek, no contam's can enter the tub.
Once the substrate is fully colonized, simply strip the bag OFF.